The pouring rain may have changed the scene halfway through, but it didn’t dampen the spirits of Wabash College graduates and guests who celebrated the Class of 2022 at the 184th Commencement Ceremony.

The celebration began Saturday in the Mall outside the Pioneer Chapel, marking the first time the ceremony has been held in its traditional location since 2019. Then, halfway through the event, graduates, administrators, faculty, staff, students, family and friends have moved to Chadwick Court due to impending bad weather.

To cap another school year defined in many ways by the COVID-19 pandemic, 221 men from the class of 2022 received diplomas from President Scott E. Feller.

“The past four years have been filled with ups and downs, moments of extraordinary accomplishment and unimaginable heartaches. A pandemic and events at local and national levels have conspired to break our community. not produced,” Feller began in his speech to new Wabash graduates. “You gentlemen are the reason for our collective success. Your fraternity bonds are remarkably strong – and will remain so as long as you nurture these relationships – as you’ve been doing it for the past four years.

“Men of the class of 2022, congratulations! I hope you will keep fond memories of the past four years. It’s true, COVID has made your time at Wabash unique historically, but not fundamentally different from your peers at other colleges. What makes Wabash fundamentally different, however, is the brotherhood. Our fellowship is essential to everything we do,” Feller said after thanking and leading a round of applause for the parents, teachers, coaches and staff who have continued to help the College and its students thrive throughout throughout the pandemic.

“I hope that in times of adversity you will rely on the brotherhood and friendships you have developed over the past four years,” Feller said. “And let ‘Wabash Always Fights’ be your guide.”

The Class of 2022 speakers were Adam Berg and Johnathan “Kenny” Coleman.

Berg is a Spanish major from Tacoma, Washington. He was a member of Wabash Christian Men, Sphinx Club, Phi Beta Kappa and Phi Gamma Delta, where he served as president. Berg was also co-captain of the football team and was named to the NCAC Academic Honor Roll.

Berg plans to go to medical school after teaching English in Spain for a year.

In his address, Berg referenced the Wabash football program motto, “1.5”. The 1 represents individual effort, Berg said, and the 0.5 is a commitment to working harder, representing anyone who can’t give their 100% on any given day.

“On the soccer field, that often means striving to challenge those around you to become better players. That being said, the sentiment behind the 1.5 currency transcends Fischer Field, the Allen Center and nine-hour bus rides,” Berg said. “1.5 is woven into the fabric that makes Wabash such an amazing place, and so much of what we do comes from a caring mindset.

“I propose that we, as graduates in a self-emphasizing world, remember the 1.5 currency,” he concluded. “As we leave this campus and pursue life after college, let’s temper our interactions with co-workers, family members and strangers with love.” 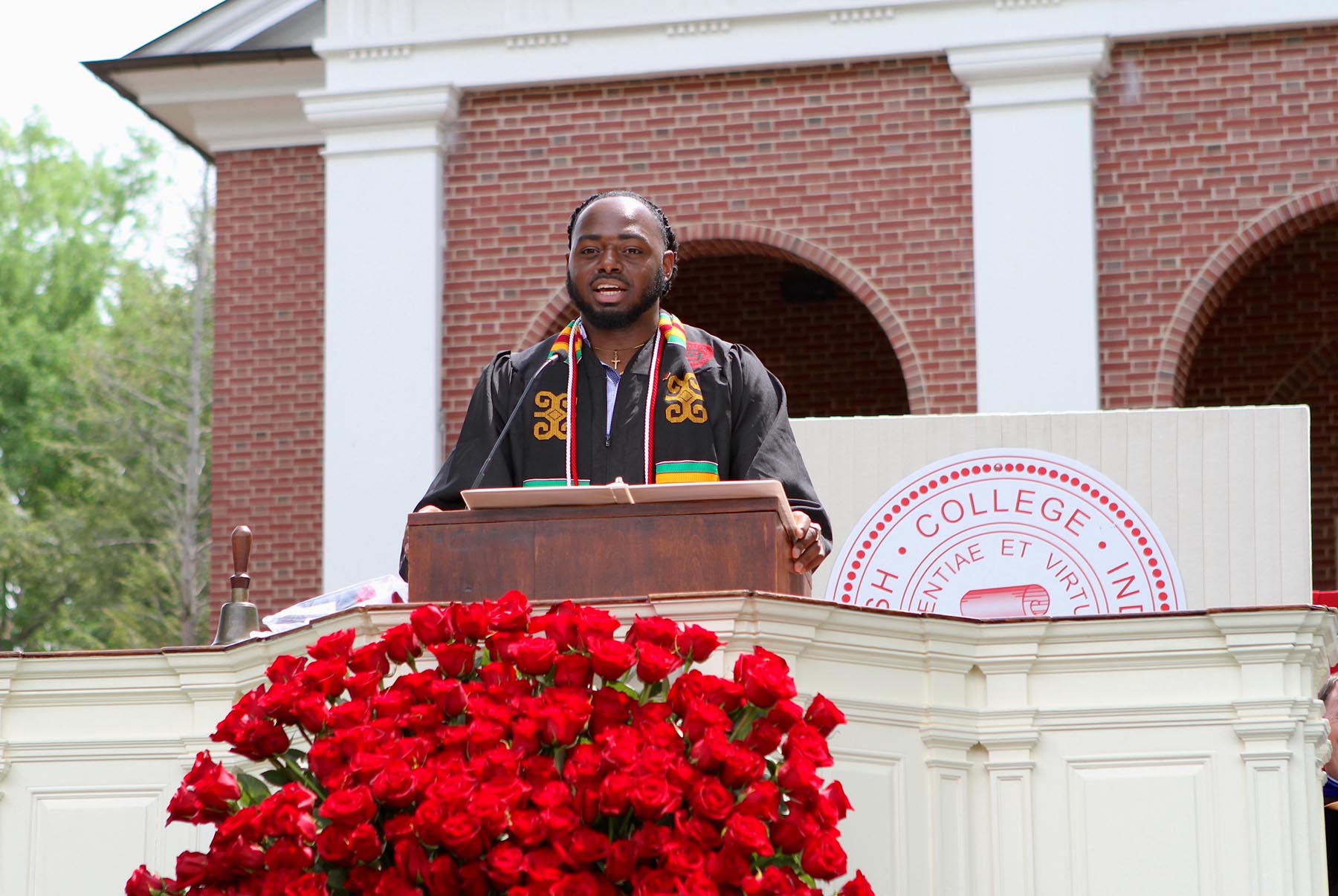 Coleman is a rhetoric major and black studies minor from Muncie, Indiana. He was a four-year member of the football and track teams and the Malcolm X Institute of Black Studies (MXIBS) where he served as president.

Coleman was named an Orr Fellow and will work for Genesys after graduation.

In his talk, Coleman talked about failure. He referenced his efforts to promote and promote diversity, equity and inclusion on campus, and said being a student at Wabash taught him to understand that he would lose and fail at times. He’s learned to keep a positive attitude and “fail,” as Clyde Morgan, head athletics coach and assistant manager of MXIBS, puts it.

“I chose to talk about losing and failing because these two concepts will inform many outcomes as we grow into fully independent adults responsible for navigating life almost alone,” Coleman said. “Our parents and friends, and even teachers may agree that we will experience both failure and loss. But that doesn’t mean we should succumb to the sentiment that accompanies these concepts. Luckily for us, Wabash has prepared us for face adversity.

“As we move forward from this place, for some once we walk through under this arch and welcome the world and all its beautiful and ugly conveniences, and for others once you resume your daily lives, I urge all world to remember one piece of advice: fail forward,” he said. “You’re going to get knocked down and even a little knocked down, but it’s up to us to make the choice to keep going. get up and keep moving forward.”

At first, the College also awarded honorary degrees to the late Norman Schumaker ’63 and Richard Gunderman ’83.

As a student at Wabash, Schumaker was a chemistry student, who received a first on his senior comprehensive exams and achieved a perfect grade point average in his major. He specialized in creating technologies for compound semiconductors, then founded EMCORE Corporation in 1984. He continued to invent and innovate throughout his life, establishing new companies like nLine Corporation and Molecular Imprints , as well as FOReTEL, which has evaluated and invested in emerging technology companies. .

“At his memorial service, they said Norm ‘believed his life really began when he started at Wabash,'” Feller said. Wabash And every time we log on to our computer or flick a switch, we know our lives have been changed by the innovative work of a good Wabash. 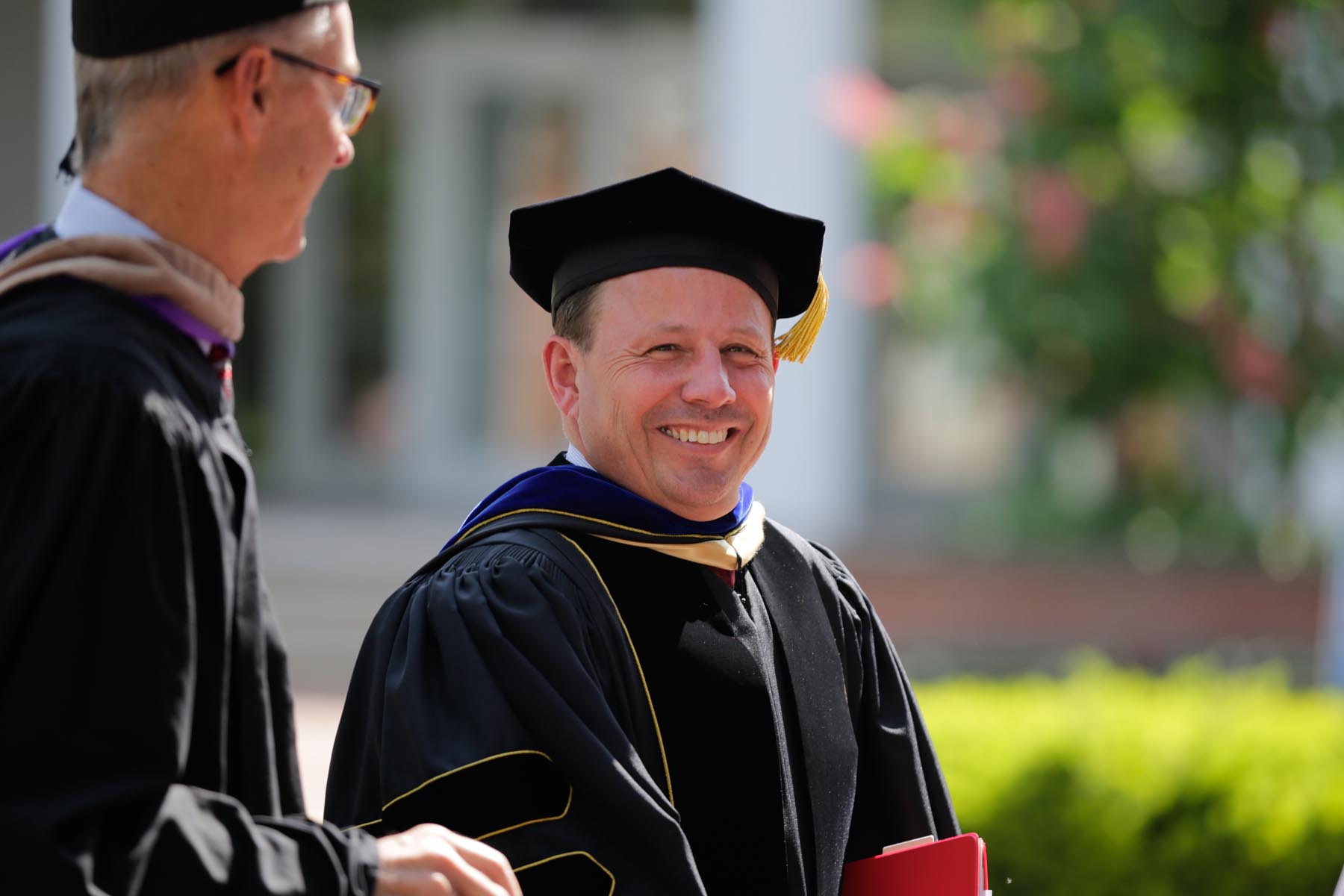 Gunderman inspired Wabash alumni and community leaders to leverage their time, talent, and treasure to create the free Dr. Mary Ludwig Clinic, which serves uninsured patients with medical and dental services in the Montgomery County.

Twenty-two students were inducted over the weekend into the Wabash chapter of Phi Beta Kappa, the nation’s oldest honors society. 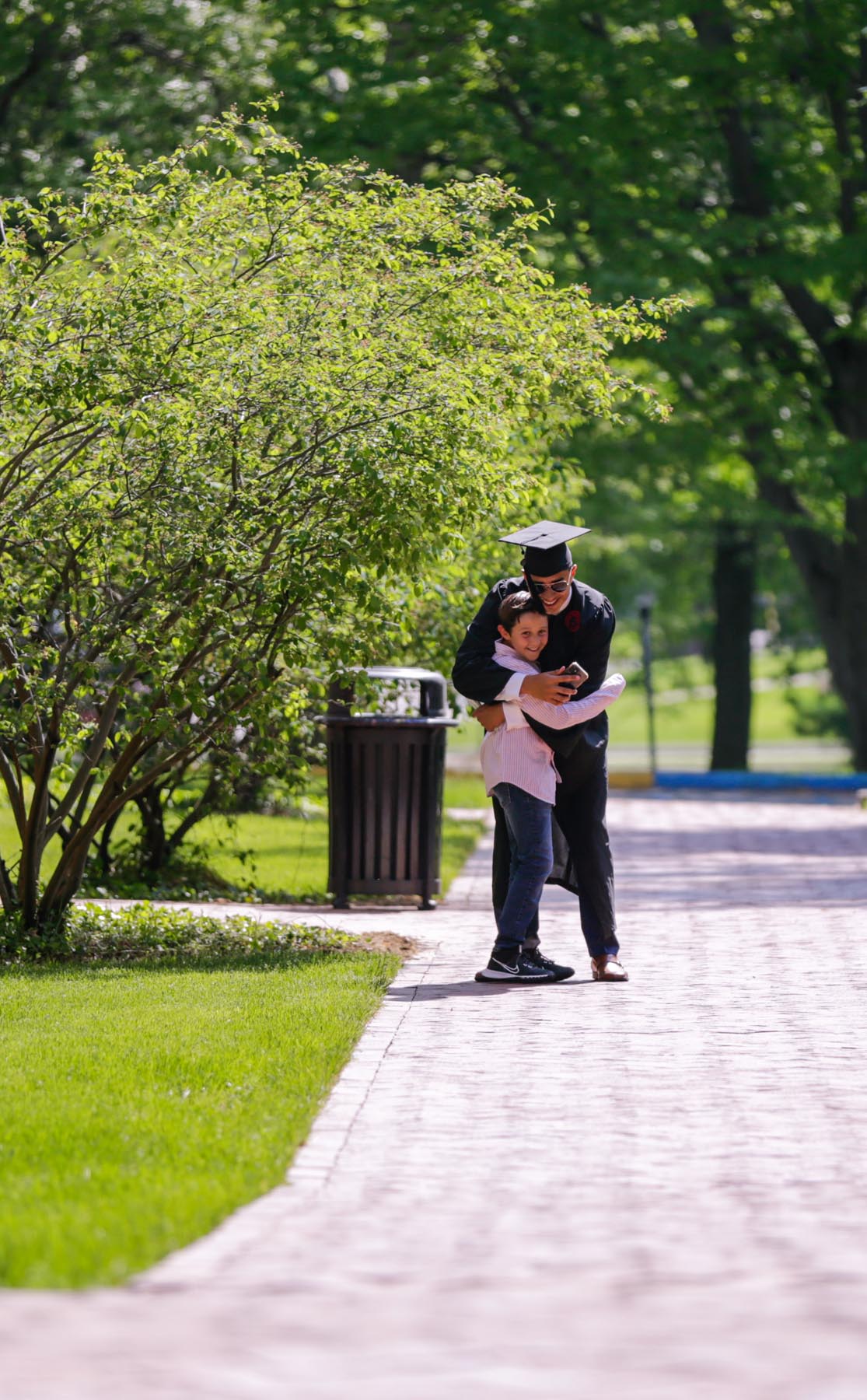 Commencement Day opened inside the Pioneer Chapel with a thoughtful Bachelor’s sermon titled “The Rule That Goes On”, given by the Rev. Dr. Alex Wimberly ’99. Wimberly encouraged graduates to use the lessons they learned at Wabash to get ahead in life, and preached the golden rule, to “really do unto others as you would have them do unto you”.

“This pandemic and its confinements, our collective traumas and our private trials have revealed what is most essential and resilient in this life. Kindness and compassion. Empathy and community,” Wimberly said. “What matters is not how smart we are or how successful we are. What matters is how we relate to each other; how well we live together – especially with those who would be left behind or cast aside. What matters is how we learn to act as gentlemen and responsible citizens.

Before officially ringing the class of 2022 with the bell that Caleb Mills used to call the very first Wabash students in class, Feller asked new alumni to reflect on their time at the College.

“You have made us so proud, and I hope that when you leave here you will understand that you can achieve anything in your dreams by believing in yourself and, if necessary, by leaning on your brothers”, concluded Feller. “Please be proud of your accomplishments – as much or more than I am – and go out into this world and be good, very good Wabash men.”